Here are some photos of New Quay to give you a taste of the town and what you may see when you come to visit. There are three beaches and two piers and many pubs and restaurants providing some of the best food along the West Wales Coast. 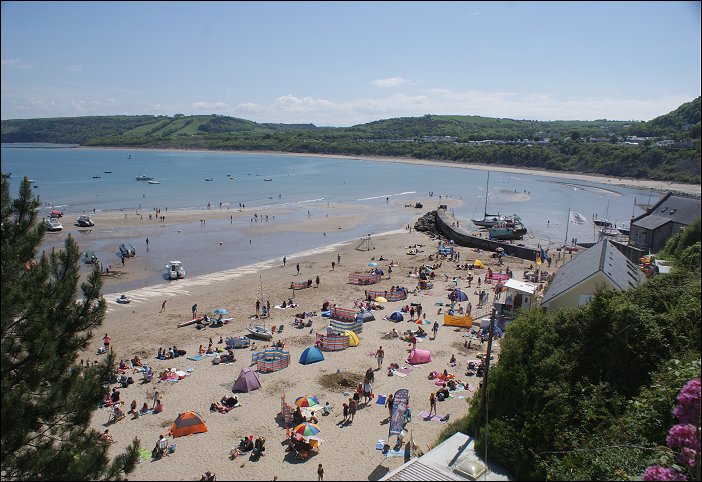 The Harbour beach at Whitsun

Apart from the summer holidays, the Whit half term holiday is the busiest time of the year in New Quay. 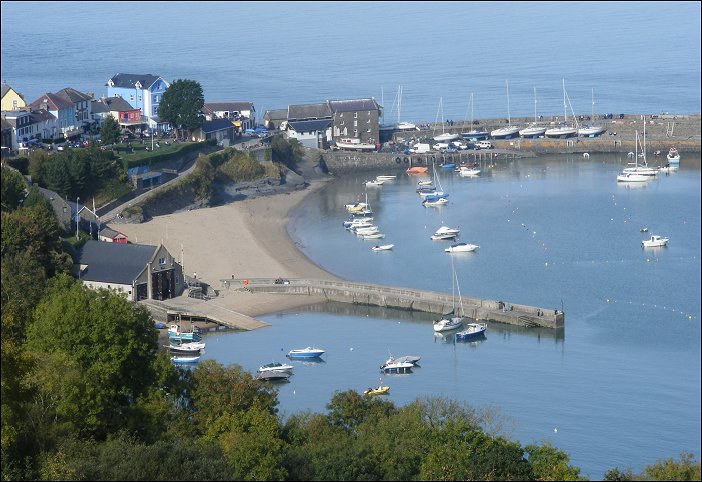 The oldest pier is Penpolion which used to be just stakes holding boulders. The new pier at the top of the photo was built in 1836 which gave the harbour a new lease of life.. 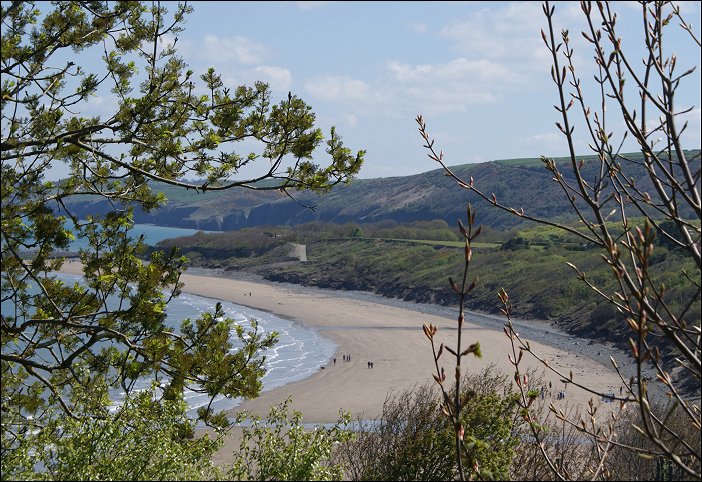 Just past the lifeboat station is New Quay's longest beach Traethgwyn. The field above the beach is known as Charlie's Field after Prince Charles's helicopter landed there. 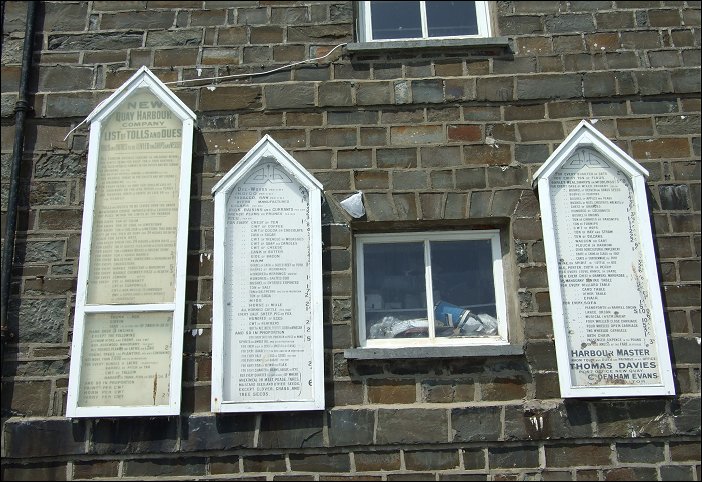 Toll boards on the Yacht Club

The old enamelled toll boards date from soon after the pier was built when revenue came from sailing ships landing their cargoes on the pier. 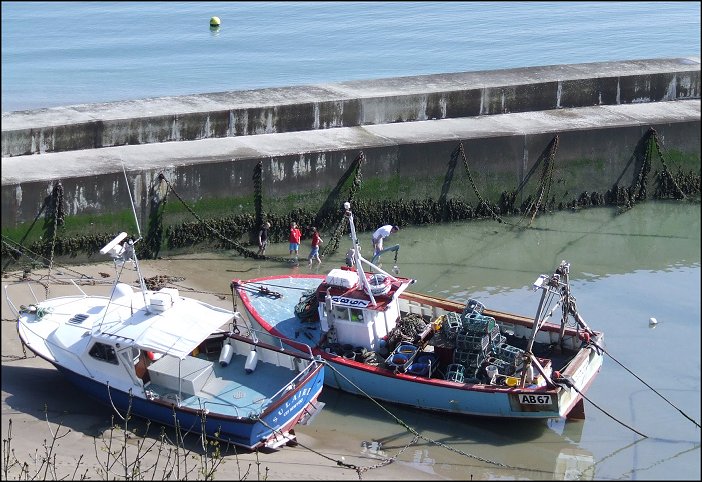 Fishing was once one of New Quay's major employers along with boatbuilding. Today just a few boats fish out of New Quay for Crabs, Lobster, Mackerel and other seasonal fish. 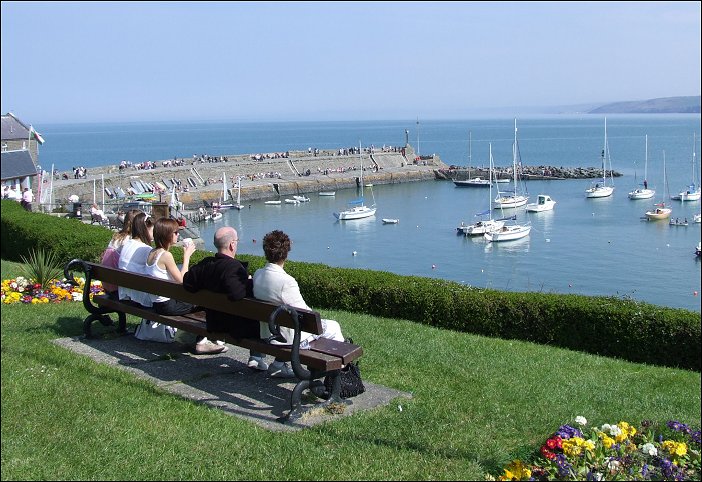 There are a number of benches on the Green above the harbour - always occupied in the summer. 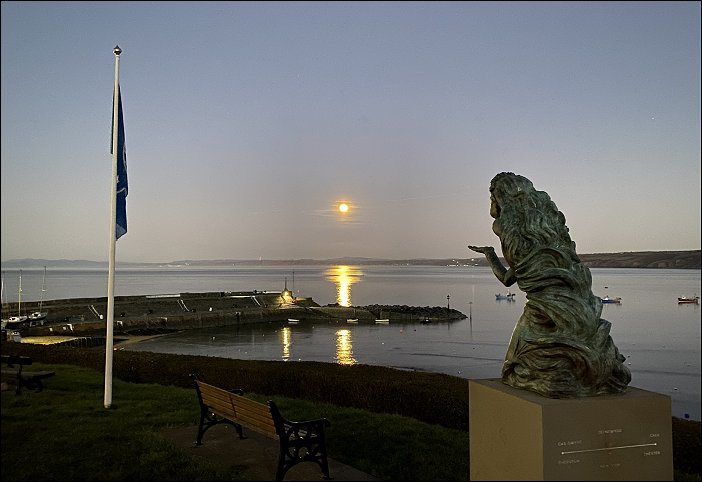 The bronze statue by David Appleyard is inspired by the town’s rich seafaring history and the Welsh language. The work speaks of the age of sail and the future of our oceans. She sits at the mid-point of the Wales Coast Path. 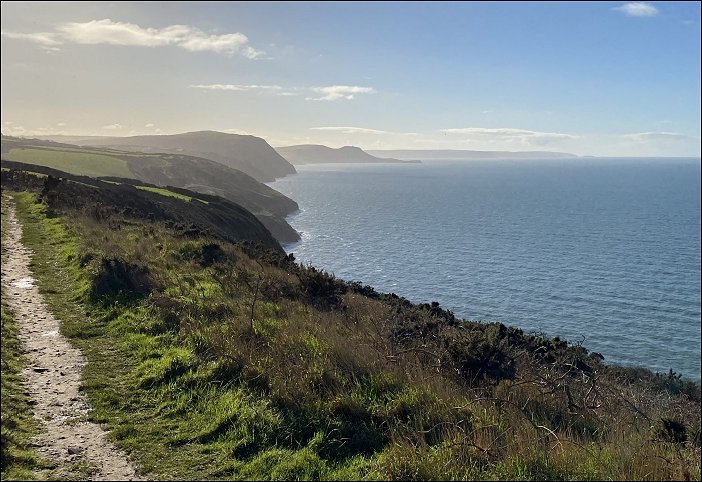 From Lewis Terrace the Coast Path continues south towards Cwmtydu and Llangrannog. You may see Peregrines, Stonechat and Chough along the way.

Since 1864, the lifeboats and crews of New Quay have covered this part of Cardigan Bay. This is the Mersey class lifeboat Frank and Lena Clifford of Stourbridge. There is a shop at the station and visitors are welcomed. Click here for more... 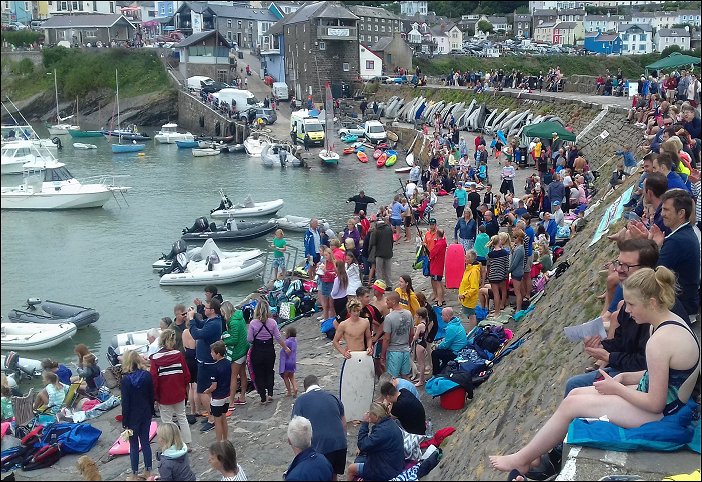 New Quay's is one of the oldest regattas in the UK, first being held in 1829. This year it is being held from August 18th to 20th. The pier is always crowded with spectators. 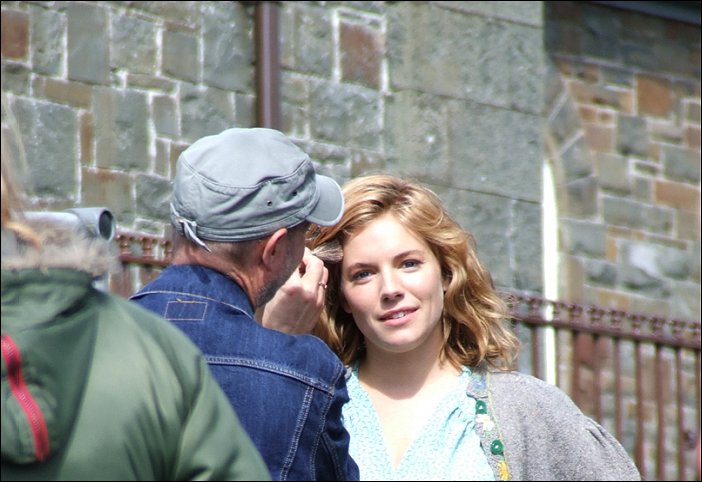 The Edge of Love

The edge of Love was filmed in New Quay in 2008 starring Keira Knightley, Sienna Miller, Cillian Murphy and Matthew Rhys. Here Sienna Miller gets her make up fixed in front of Towyn Chapel. The film is about Dylan Thomas and his relationship with his close neighbours, the Killicks. 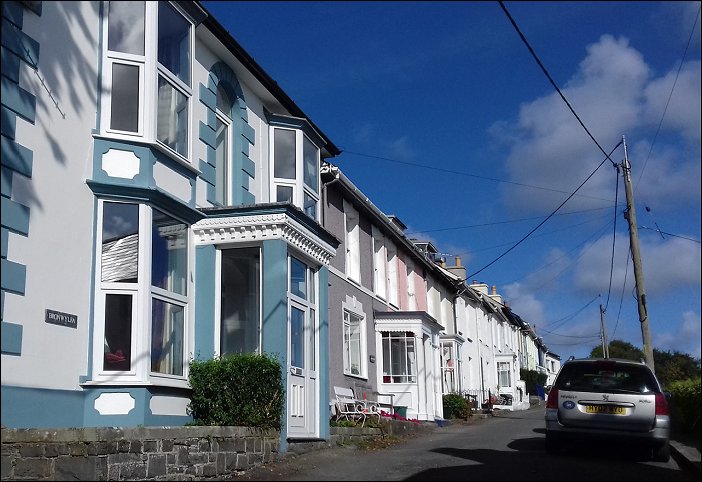 This street has a good selection of traditional New Quay porches. The first houses were built here in 1860. This terrace leads directly on the the Coast Path. 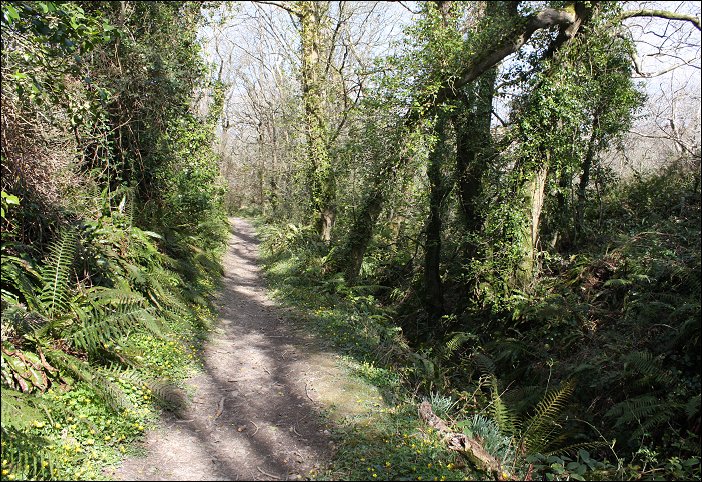 This ancient path runs from the car park behind Costcutter, and follows Cwm Gido up to Maenygroes Chapel. It makes a lovely circular walk from New Quay returning down Francis Street 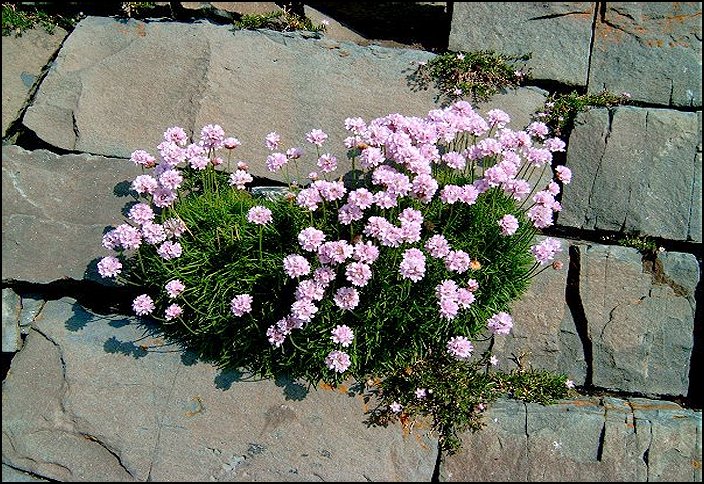 Flowers on the Pier

This is Thrift. You will also see Valerian (White and Red), Samphire, Sea Spurry, Sea Mayweed and more.CLICK HERE for a page on flowers of the coastal path 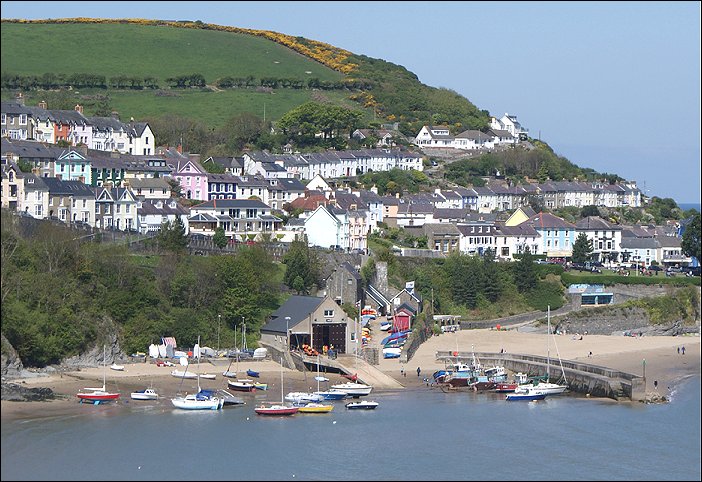 The Lifeboat STation is close to the old Penpolion Pier. It can be accessed from Gomer Terrace by path or from the beach 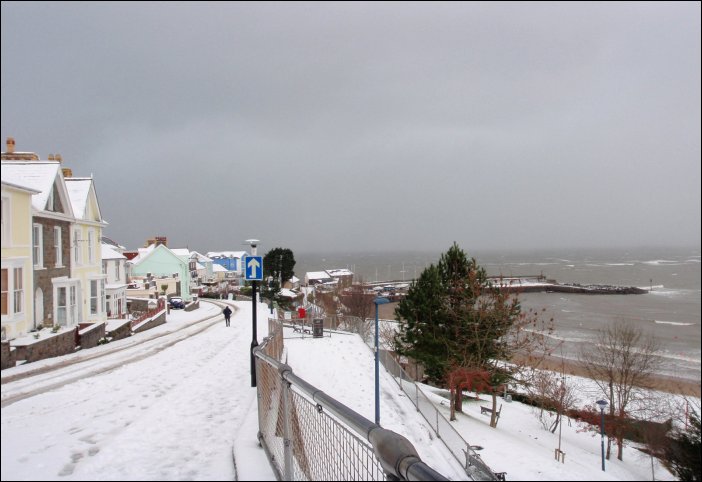 New Quay rarely sees snow although there may be several inches just up the road at Synod Inn. This is the last serious snowfall in December 2010. 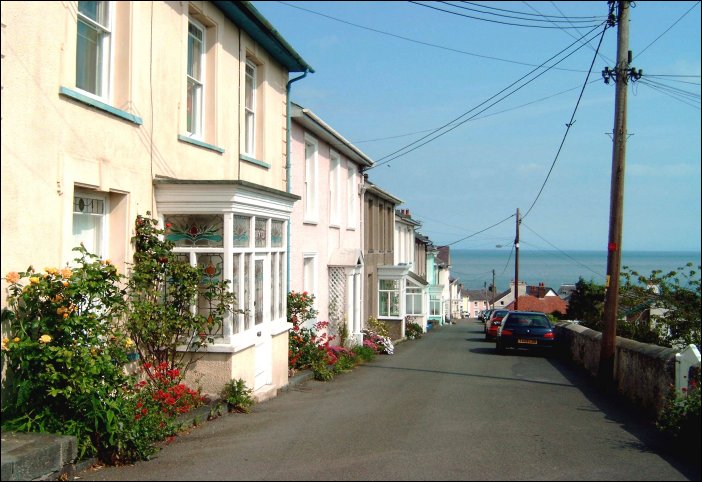 The first house was built here in 1851 when it was known as Chapel Row, By 1861 there were 17 houses and it was now High Terrace. Mostly the houses were occupied by mariners. 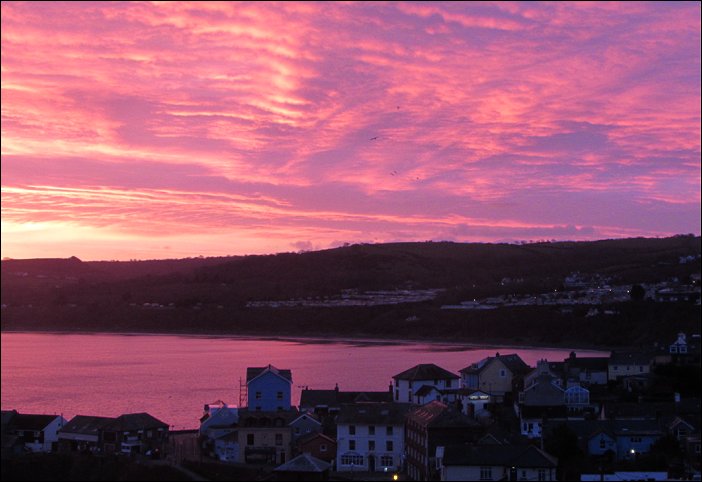 Waking up on Lewis Terrace

New Quay has spectacular sunrises - especially in the winter. This was the view from the window of the top flat at 12 Lewis Terrace - The Lookout.Click here for more...

West Wales Cottages and West Wales Caravans have been operating in and around New Quay since 1999. We are a small family business and operate from our historic smallholding - Once known as Black Lion Fields and then associated with Jack Patrick's family ('Jack Pat' of Dylan Thomas' Under Milk Wood) on the hill above New Quay. Open 9 am to 9 pm Seven days a week. Call 01545 561707 with any questions or enquiries. 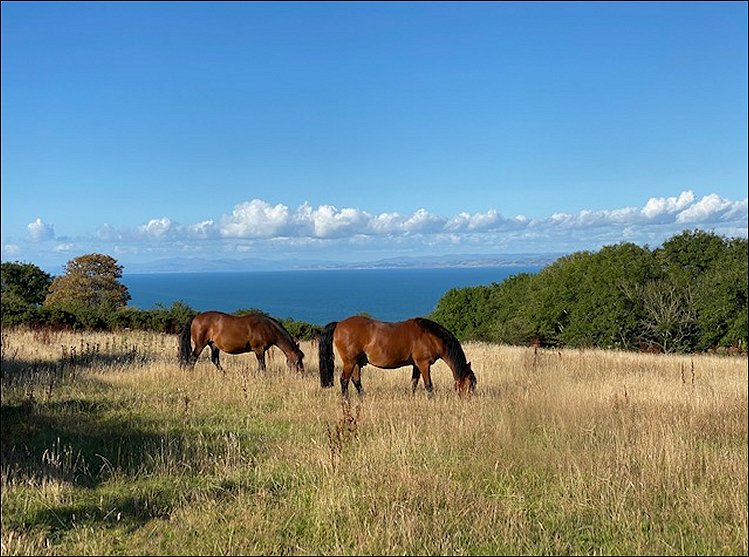 Made with Mobirise web page cractivitiesor