Many photographs of New Quay have survived thanks to the work of local photographers specialising in post cards. Some of these are Charles H. Dierks and Shirley Brooks. They had premises at 9 George Street in New Quay and at 19 Alban Square Aberaeron around 1910. Another local photographer was Tom Desmond of Priory Street Cardigan. 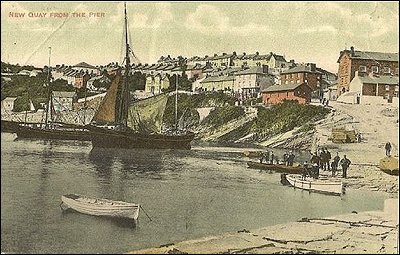 New Quay was a busy port 100 years ago. Sailing vessels would bring in Lime, coal, and all manner of goods to be unloaded at the side of the pier. 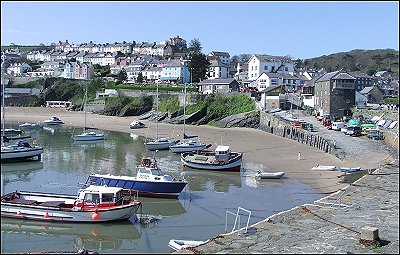 The old enamelled tariffs boards can still be seen on the side of the building on the right which is now used for fishing storage and on the upper floor, is the New Quay Yacht Club. 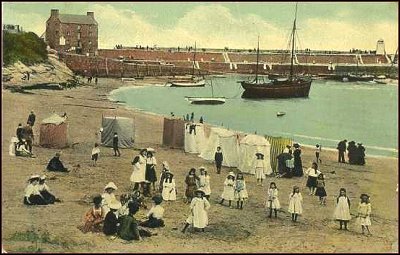 Bathing tents were popular in Victorian times to preserve modesty while changing. 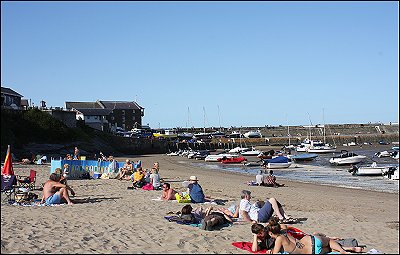 This photo taken in September 2020 shows family groups 'social distancing' along the beach. 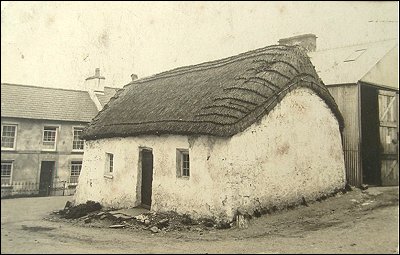 This thatched cottage stood on what is now a parking area in front of Adam's Garage. The cottage was demolished in 1938. 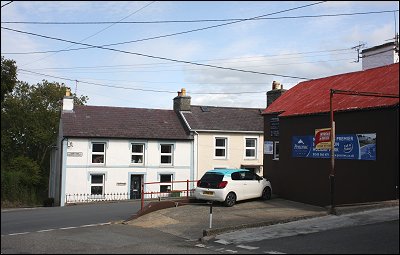 The garage is presently for sale. The house across the road dates from 1861 and was the 'Prince of Wales' pub in 1871. 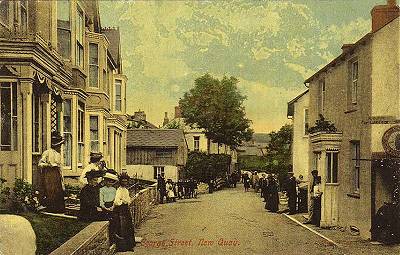 George Street in New Quay 100 years ago was much the same as it is now. The house on the right was formerly a funeral home, now a family home. 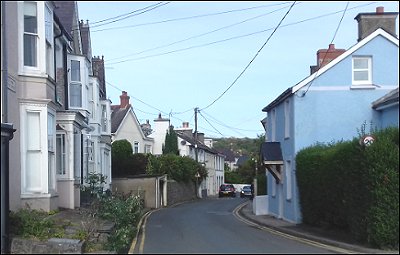 George Street was first named after 1851. There were once 2 pubs on this street, the Shipwright's Arms and the Prince of Wales, which is now a private house. 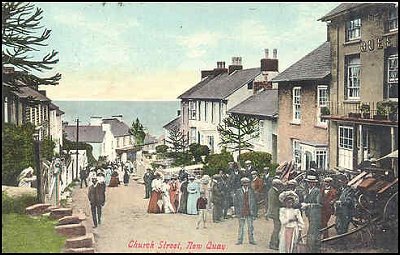 The building on the right is the Queens Hotel. The innkeeper in 1903 was Evan Davies who hired out ponies and traps and offered a taxi service. They can be seen in front of the hotel in this old photo. 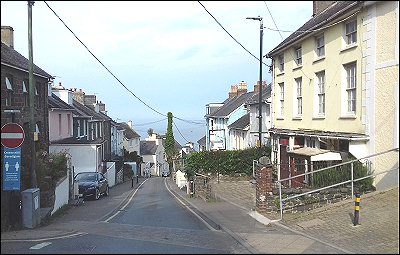 The Queen's Hotel has now closed down and is presently unoccupied. 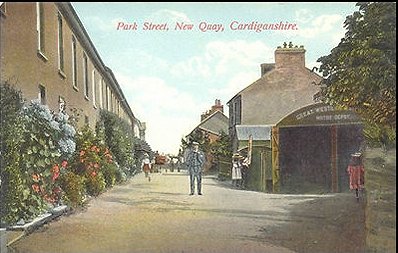 The Great Western Railway motor depot on Park Street was for the benefit of road transportation for bringing customers from the station at Aberaeron. Shown here after a rare snowfall. 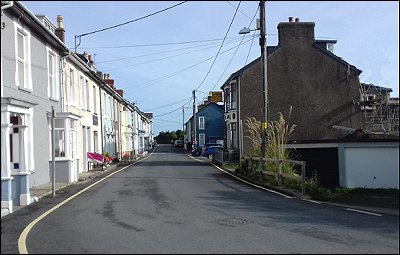 The depot has been replaced by private garages. The houses on Park street were mostly built between 1851 and 1861. One Park Street was the White Lion pub.

THE PIER AND THE PEPPER POT

The Pier was built after 1834 when Daniel Beynon was invited to submit a plan which was carried out after the formation of the New Quay Harbour Company. The small stone lighthouse, 30 feet high, was not built until 1839 and was placed at the end of the pier. It was known locally as the 'Pepper Pot' - an item that it clearly resembled. A severe storm in 1859 damaged the pier and washed the lighthouse away. It was rebuilt but destroyed a second time almost 80 years later during another severe storm on 28th February 1937. The pier was built from Rock carried from a quarry at the end of Rock street (known as Rock Terrace) on rail tracks, a tiny portion of which remains today behind Gingeros cafe. 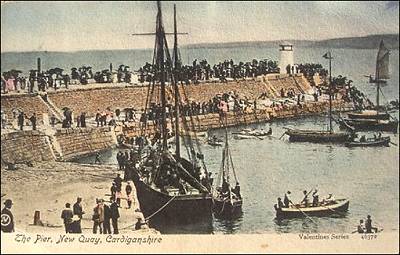 Sailing boats by the pier

As well as a busy port, New Quay was a center for boat building, and at Cei Bach there were numerous boats launched. In Victorian times, New Quay was becoming a popular resort for day trips. 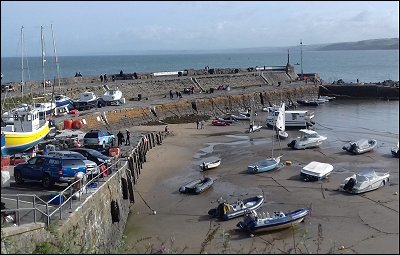 The pier was once where goods were brought into New Quay by boat, today it serves the tourist boat operators and private craft. It is a favourite place for watching Dolphins and eating fish and chips. 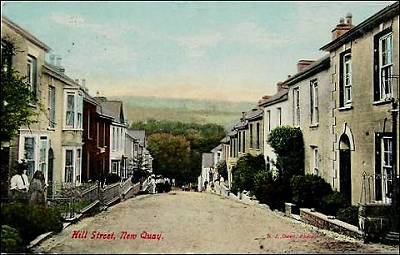 The first houses on Hill Street were built between 1881 and 1891. One of the properies, 'Bank House' was once Lloyds Bank. 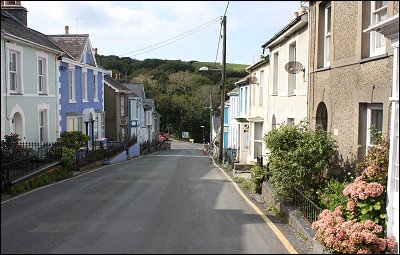 Again, little changed in 100 years other than the houses being more colourful. 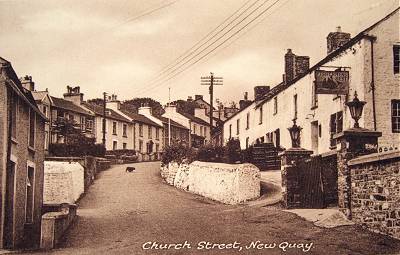 The pub on the right was The Fisherman's Rest, later to be renamed the Dolau. It is no longer a pub, but an annexe to the Black Lion Hotel. The property next door is now the 'Pepper Pot' restaurant. 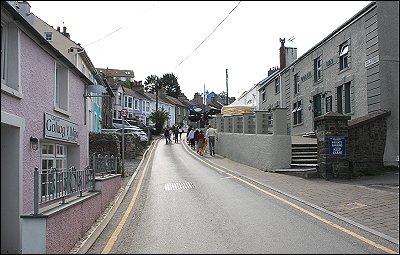 The property on the left is 'Golwg-y-Mor' a butchers shop also selling local produce. 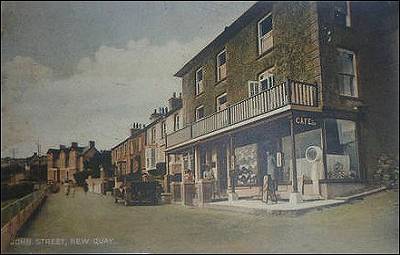 The property in the foreground is Cliffside, built by John Evans, owner of the Penwig Estate, after whom South John Street was named. The property was originally a chemist, then a drapers in 1861, a grocery store in 1881, and became a hotel and cafe in 1929. 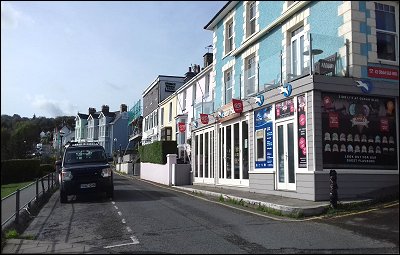 Cliffside is now a gift shop called 'Ocean Blue' It has the only cash point in New Quay. 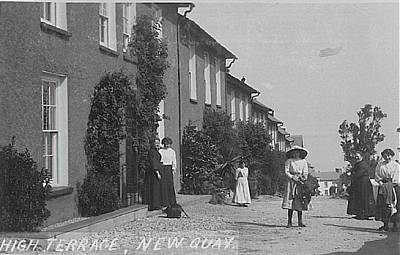 Building started on High Terrace in 1851 when it was known as Chapel Row. At that time there were only 3 houses. 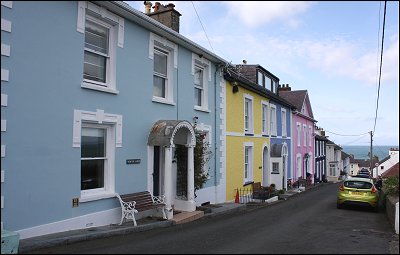 High Terrace is now a much more colourful street. 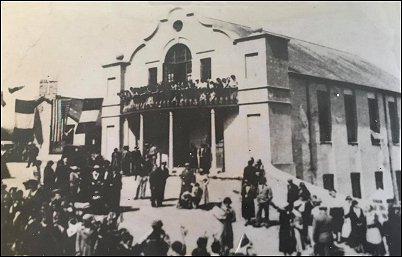 The original Hall building in the 1930s before the fire and rebuilding. photo courtesty Briddon family. 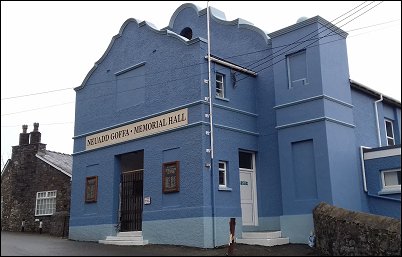 The balcony has been replaced with the large foyer. The hall has just had a major refit ready for 2021.